« My collaborations in San Sebastian have increased because here I can collaborate with very good physicists not only at the university, but also at institutes like Nanogune and the DIPC » 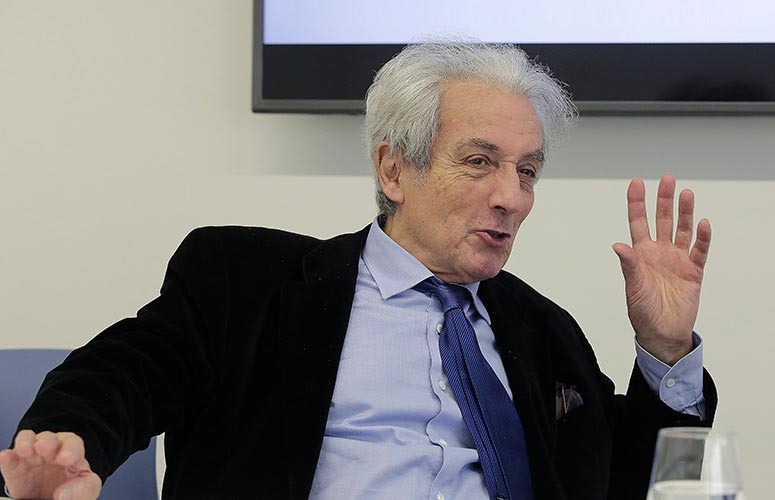 Albert Fert (Carcassonne, 1938) is one of the two scientists responsible for discovering giant magnetoresistance, a nanophysics effect which made it possible to revolutionise hard disk technology, and which also triggered the development of a new kind of electronics, called spintronics. For this discovery he received the Nobel Prize in Physics in 2007, together with Peter Grünberg. His current research in spintronics is promising and points towards a new generation of computer components which would consume much less energy.

The French physicist was made an Honorary Doctor by the University of the Basque Country (UPV/EHU) in 2017. In 2020 he took up the position of Distinguished Researcher at the UPV Faculty of Chemistry in San Sebastian, where he goes about his research work in the Materials Physics Department. He also collaborates with institutes such as the Donostia International Physics Center (DIPC) and Nanogune. He is the first Nobel Laureate in Physics to join the team of professors at the Spanish university.

Albert Fert has also regularly participated as a speaker in the Sol Sky-Mag conference (International Conference on Magnetism & Spintronics) held yearly in Donostia/San Sebastian since 2016.

When did you come to San Sebastian for the first time and what attracted you most to the city?

I think the first time was some 20 years ago, and this is an area I like very much. I have frequently returned to San Sebastian for scientific conferences, as part of my collaborations with the university.

What attracted me most were the local landscapes, the view of La Concha, the beautiful views from the Hotel Londres, the view from mount Igeldo... My wife and I are also very fond of the city’s elegance. It is a city with very beautiful streets, with lovely shops, and a great deal of elegance in the shop windows... It is a very clean city and is very pleasant to walk around.

Coming to San Sebastian also means cuisine, the fine restaurants with Michelin stars that we know. And we also like the beauty of many houses, the sculptures in the city, the Comb of the Wind, the Chillida museum... And the surroundings; for example, we love taking the road to Getaria, it is a very pretty port and has some excellent restaurants.

What do you think of the science and innovation ecosystem in San Sebastian?

Well, the proof that I like this ecosystem is that I have chosen to have many collaborations with the universities and laboratories of San Sebastian. I am currently a Distinguished Researcher at the university, and in fact, for a long time now, I have been collaborating with the scientists, the very good scientists of San Sebastian, given that these collaborations started some fifteen years ago with a physicist called Luis Hueso, one of the leaders of the Nanogune laboratory.

These collaborations began 15 years ago, as did publications in the Nature journal, and later these collaborations increased because there are very good physicists not only at the university, but also at institutes such as Nanogune and the DIPC (Donostia International Physics Center) presided by Pedro Miguel Etxenike and directed by Ricardo Diaz, with both of whom I often collaborate.

In my opinion there is a great deal of cultural, artistic and scientific animation. Cultural, with the film festival, the jazz festival... and scientific, for example, with expressions such as Passion for Knowledge, organised by the DIPC, which presents conferences with very good international scientists on scientific problems.

What is the reason for your collaboration with the University of the Basque Country and the Donostia International Physics Center? On what are you all currently working?

My current collaborations with physicists here in San Sebastian are, for example, related to research in a new family of materials, 2D materials. Graphene was the first 2D material introduced to physics 20 years ago; since then, an extensive family of 2D materials has been developed which offers a number of advantages with respect to the usual 3D materials. More generally speaking, I work on collaborations in spintronics to make sensors and study new properties of surface electrons, known as topological electrons.

You received the Nobel Prize in 2007... how did you live that distinction? Did it open doors and opportunities for you?

I think I was fettered for two years because there were so many things to do, interviews, broadcasts on radio programmes which slowed me down a bit... And then, after two years, I was able to return to my research activity at the usual rhythm. I have done a lot of interesting things since the Nobel Prize.

What are your next research challenges?

Right now I am working in new directions that didn’t exist ten years ago. I refer to a series of 2D magnetic materials and to materials known as topological. In the first place, this is one of the subjects of my collaboration with San Sebastian; however, I am also working other subjects, perhaps a little more difficult to explain, which are new quasiparticles, known as skyrmions. Skyrmions are small spin swirls located in a few atoms, which have a particular topology.

These tiny skyrmion particles are like little balls and we can move them at very high speed, at speeds that can reach one kilometre per second. Thus, in a type of ball like this, 1 kilometre per second means that it covers nanometre distances in very little time, somewhere around a nanosecond, meaning that the fundamental interests of promising applications in the study of this kind of topologically protected particles are myriad. Intervening here are concepts of mathematics, concepts of physics, and of relativistic quantum physics, too. The point is that the fundamental interest in exploring this kind of physics is enormous, as are its potential applications. A certain number of applications have been proposed, and we are working on them at my laboratory.

I must say that there is a new direction in my laboratory which interests me and by this I mean components for neuromorphic computers inspired in the brain. Let me put it this way, the brain functions much better than today’s computers, it is much more efficient, and today there is a certain tendency in computer science, in computerisation, towards the manufacturing of computers based on the principle of the way the brain works with synapses and neurons.

But today the synapsis or neuron is limited in these neuromorphic computers by a small microcircuit which has some 50 transistors. Straight away we are talking about computers that are very big and use a great deal of energy. In my laboratory we work on the development of nanocomposites, synapses and neurons, which are very small, and which are not microcircuits, but which use spintronics to produce the synapsis or neuron function in a single nanocomponent.

Spintronics already have important applications in the domain of the Random Access Memory, a series of essential computer components. The classic RAMs with semiconductors use a great deal of energy. They are RAMs in which the information is saved in volatile mode, i.e. they always require an energy supply to maintain the memory. Spintronics has invented a series of MRAMs (Magnetic Random Access Memory) which have the advantage of using much less energy, something which is a considerable advantage for the problems of global warming.

In fact, today, certain companies such as Samsung and others are starting to mass produce these new spintronics composites which may already have been introduced to your computers or telephones without you realising it, and which make it possible to progressively reduce a great deal of the energy consumed by all information and communication technologies. If you will allow me to make a comment on this subject, these information and communication technologies, with the development of the Internet and of Data Centers, consume more or less 10% of world energy, which is, for a start, rather a lot. And it is expected that with the development of Data Centers this figure will reach 20% in ten years. We therefore hope that these new composites emerging from spintronics, if the electronics industry succeeds in progressively mass producing them, will make a significant contribution to the slowing of global warming.

What do you think the city of San Sebastian offers researchers and scientists?