The San Sebastián Enbaxadore programme gives public recognition to the personal and professional efforts made by those in the fields of medicine, science and/or technology and academia in putting forth the city as a candidate venue for conferences and organising meetings. It seeks to highlight the effort made, its economic repercussion and the knowledge it generates and spreads in our environment.

It also aims to achieve wider national and international promotion of San Sebastián as a conference destination and to increase the number of events hosted by the city in the future.

What does it involve?

The Enbaxadore programme will gather, in a select club, professionals who have been particularly proactive in harnessing conferences for the city; it will include a battery of actions and benefits intended to “reward” their work and encourage professionals to present candidacies for congresses and conferences in San Sebastián.

The Enbaxadore programme brings together the region’s leading professionals with the goal of making San Sebastián a city of science and knowledge, as well as a notable venue for scientific and technological conferences and events.

The stars are professionals in their area who are either in a position to promote our city as a conference destination or to present a candidacy of their own. These professionals can either be ambassadors in their own right or they can represent an entity.

There are 3 types of enbaxadore:

Those admitted to this select club will receive public recognition from the city and the region, with the sincere gratitude of the citizens for their work to promote San Sebastián and Gipuzkoa as a conference and congress destination. On the other hand, added to the honour of the distinction, the professionals will have the opportunity to meet and interact with people from their field and other disciplines during the social events that will be hosted by the programme.

Enbaxadores personally honoured with the distinction as direct promoters of professional meetings in San Sebastián will be invited to high-flying events in the city’s wide-ranging cultural agenda and will receive other invitations and surprises.

All three types of ambassador are part of the Embaxadore programme. However, as from 2012, the recognition will only be granted personally to professionals who either attract a conference with the following characteristics to the city or organise one themselves:

Validity of the personal ambassador title: five years from the moment the conference is secured, or until it takes place if it is to be held after the 5 year deadline. However, honorary and institutional ambassadors will preserve their titles indefinitely. 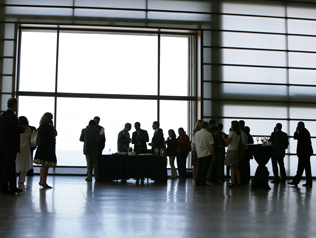 Would you like to bring a congress to San Sebastián?